Anyone who knows the Enneagram has been told about the 3 centers and how each of them works. Let's do a quick review here.

The instinctive center is the one of action and/or non-action. It is concerned with physical and psychological survival and, to maintain these, has a focus on control. It seeks to answer the question: How? How to do it? He experiences a problematic with anger as soon as things or people get out of control.

The emotional center is, as its name suggests, the one of emotions. These emotions are ephemeral and volatile, changing from one moment to the next; so, if " I am" my emotions and they change all the time, how can I find my identity? He tries to find out who he is and what he is for others and to answer the question: who? Who am I? He therefore experiences a problematic with identity and image.

The mental center is the one of logic and rationality. It believes that the world should be entirely explicable and predictable by reason and logic. It seeks to answer the question: why? It experiences a problematic with fear as soon as the world is not understandable and inexplicable to its mind.

Enneatypes and the problematic of one's preferred center

Each enneatype, before undertaking personal development work (and succeeding in becoming aware of or even detaching itself from its egotic automatisms), is more or less aware of this problematic.

Within the instinctive center1:

Within the emotional center:

Within the mental center:

We get so this table:

Positioned on the Enneagram symbol, we get this figure, which we will call here the triads of self-awareness: 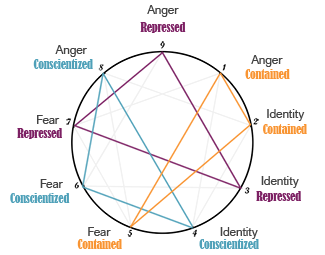 What can be observed is that the only enneatypes that are already together in a triad are the 4‑6‑8 which also form the harmonic triad presented by Riso and Hudson2 and which they call “reactive”; David Daniels3 groups them together under the name of “expressive”. However, it seems coherent that the enneatypes who are the most aware of their problematics are also the most suited to express their needs and discomfort and to be the most reactive.